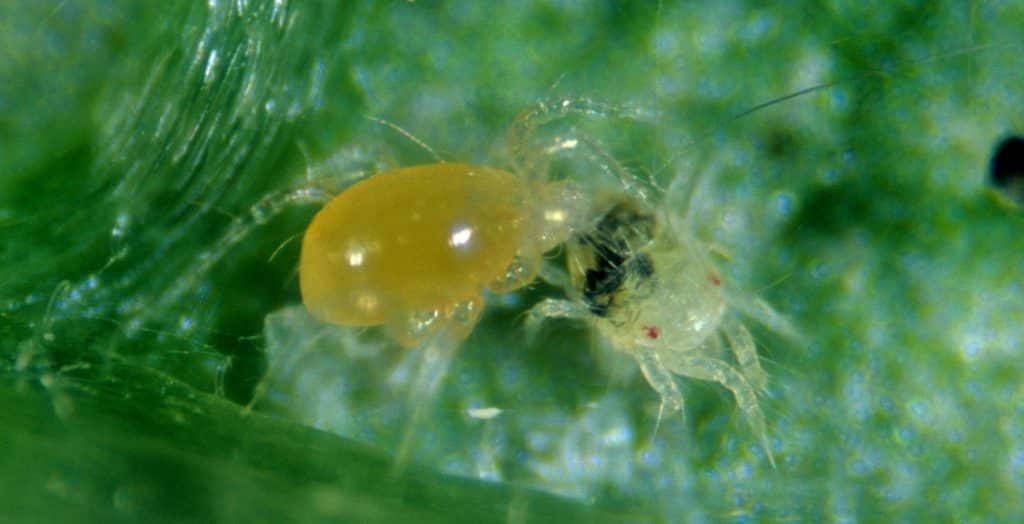 It has taken time for rose growers to learn crucial lessons on biological control of the two-spotted spider mites, Tetranychus urticae[1]. These lessons have taught us that, yes, you can apply phytoseiid predatory mites to a rose crop and get your spider mites under control, but it is not the classical biological control where you release predators which then feed on the prey, multiply and reduce the prey population until the two populations eventually oscillate into a balance. Whereas Colombian rose growers might just be getting the grip of it, there are still lessons to be learnt from their Kenyan counterparts, many of whom now have biological control incorporated in their DNA.

Predatory mites are put to work in industrially grown rose crops in much the same way as a biopesticide. Predatory mites reproduce very little in industrial rose production and growers do best when applying an appropriate release methodology. You, the grower, release the predatory mites, they then feed on the spider mite prey, Tetranychus urticae. However, the authors[2] of this paper have witnessed over 15 years that predator reproduction in industrial greenhouse roses is low – probably due to the direct and accumulative effect of other necessary pesticides and fungicides used in the crop. So, you, the grower, will need to keep applying predators just as if they were a biopesticide. The good news is that it will pay off with when you get it right.

Here’s a simple three step formula to succeed with your biological control of spider mites.

The predators will feed on the spider mites, but they produce comparatively few offspring. So, rule number one is first to bring down your population of spider mites with compatible chemicals, i.e. chemicals with short-lived persistence in the crop. For example, Organo-silicone adjuvants, such as Silwet Gold, are a good option but make sure you don’t spray in direct sunlight. Your supplier can also provide you with a list of compatible chemicals. Remember, at this stage, it is the short-lived persistence that matters and not whether the product kills your predatory mites because this is before predatory mites are released.

Most of the scout’s time is spent on (1) walking diligently through the crop, (2) searching thoroughly for the pests and diseases in each observation point and (3) recording observations. But if the scout simply records presence you will only get information about the pest incidence and will not get the full understanding of the spatial distribution of the pest severity.

Even if the scout records pests on a scoring scale, spends a little extra time on counting the pest in a pre-defined sampling unit and then concludes which severity score level to record, these classified scores are not of continuous data like our number system – and are therefore no good for statistical analysis. Instead of having the scout spending time on figuring out which score class to record, the same amount of time is much better invested in recording the real counts. There are excellent methods for quick counting that a good scouting company can train your workforce to implement.

Recording the counts spatially allows the corresponding spatial analysis to map the deficiency and sufficiency of the predatory mites. Continuous spatially targeted release of predatory mites in the locations with predator deficiency should come next. Releasing in numbers that bring the ratio of predators to spider mites below 1:10 will significantly reduce the time taken to get the spider mites under control.

These targeted spot releases will be most effective when applying the strong hunter of the specialist predatory mites, Phytoseiulus persimilis, which specifically and exclusively feeds on the two-spotted spider mites, Tetranychus urticae.

Blanket releases should be carried out  applying the resilient, more ‘generalist’ and more cost effective Neoseiulus californicus (formerly known as Amblyseius californicus) which can survive on alternative preys such as other mites and pollen, where or when the spider mite population is very low and the great hunter Phytoseiulus persimilis won’t have many feeding options.

Excellent record keeping of the scouting analytical results allows for a crucial evaluation of the interventions. Evaluation of the effectiveness of control measures ensures that lessons are learnt quickly, expensive wasted effort is avoided and irregularities are spotted early.

If you release too few predatory mites, rather than taking enough ‘soldiers’ to the war, you will extend the time of the battle. If you are an industrial rose grower and you intend to wait for the classical biological control dynamics to kick in, you are waiting in vain. If you apply the strategy of going in with an abundant army of predatory mites and control the process with excellent monitoring and analytical tools, you’ll win the war quickly rather than extending the pain.

On one hand, when you replace your miticides with predatory mites, other pests that were suppressed by the miticides before may now inevitably flare up. This is an uncomfortable challenge for the growers who use biological control. On the other hand, as you may need to spray pesticides against these ‘new’ pest problems, these pesticides are likely to negatively affect your predatory mite population. Hence, you find yourself between the devil and the deep blue sea.

But there is another huge gain from this strategy. First, you need to get your spider mite population to zero and, yes, that’s possible if you diligently execute the war strategy outlined above. Once your spider mite population is as good as zero, you’re no longer so sensitive about your predatory mite population because there won’t be many of them left – they have done the job anyway. You can calmly spray your other pests as long as you choose pesticides with short residual effects, which will allow you to come back with the resilient and cost effective Neoseiulus californicus if you see signs of spider mites returning.

Clean up the house

The above strategy can allow growers to successfully clean up one greenhouse from spider mites and move on to the next. It is indispensable that you apply the same strategy simultaneously in the houses that share the same workers and keep other workers away from other spider mite infested houses in order minimize the reintroduction of spider mites from elsewhere. On many rose farms, the same group of workers operates in two houses, so pair these houses and apply the same strategy in these at the same time.

Clean up a pair of houses and let them go into ‘maintenance mode’ with occasional blanket releases of your resilient friend Neoseiulus californicus, combined with continuous scouting and spatial analysis as you continue your warfare strategy in the next houses and eventually clean up the entire farm.

You can never relax, but it is easy when you setup a solid work structure. Identify a serious and determined biological control ‘specialist’ among your personnel and dedicate him/her the task of leading the predator releases and keep the war going until the last spider mite falls. The key is to combine target releases in hot spots with the great hunter (Phytoseiulus persimilis) and blanket releases for maintenance with your resilient friend (Neoseiulus californicus).

The reason to continue until the last spider mite is because that is when it gets cost effective. You will have taken a great burden off your shoulders – as you will have freedom to spray your other pests and diseases without stressing too much about your predatory mites. You’ll have few predators left and next to no spider mites, so you will see the results in a much better-quality crop, without it suffering greatly from miticide sprays. Release few predators, here and there, and now and then, in accordance with your scouting results.

“We have benefited significantly from the improvement in the information and analysis provided by this technology”, explains John Ngugi, technical manager of Equinox Horticulture near Mt. Kenya in East Africa. “Once we had the structure and control measures in place, we reduced our requirements for Phytoseiulus persimilis by 60-90%, depending on the season.”

This is a triple win. You as a grower benefit from improved crop quality and lower long-term costs of pest control. The predator supplier will have grown their market share in terms of hectares – perhaps selling less per hectare but they will sell to a greater number of hectares. And of course, the environment benefits from reduced pesticide usage.

[2] Henceforth referred to as spidermite