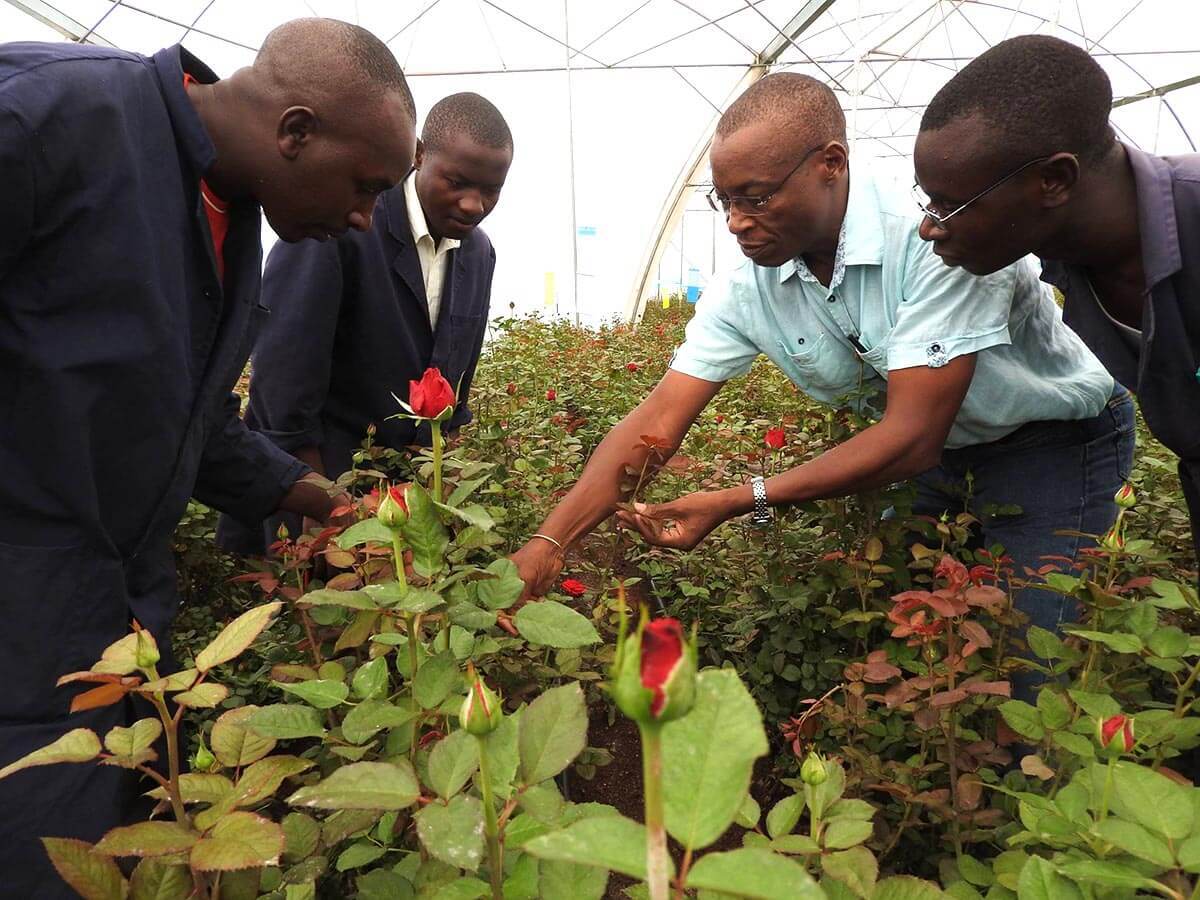 Few diseases strike more fear into industrial rose growers across the highland tropics than downy mildew, Peronospora sparsa. The disease can appear quickly when cool temperatures (10-18°C), high relative humidity (> 85%, > 3-4 hrs) and excess moisture on leaves combine particularly on young apical tissue – the weakest point in a plant. There is only one way to combat downy mildew, by taking a zero-tolerance approach across every greenhouse on a farm, and that means taking appropriate prevention methods, combined with early detection and rapid intervention when necessary.

One of the primary signs of downy mildew are purplish red, brown or blackish angular spots on the upper side of a leaf, particularly in areas between major veins. In fact, in humid environments (>85% RH), grey to brownish erect sporangiophores will form on the underside of the leaf and conidia will spread from here by any air currents and water splashes.

Sporulation will not always be visible underneath the leaves, but the risk of this taking hold  when environmental conditions are favourable is high. Purple patches can also be identified on stems, peduncles, floral sepals and petals.

Zeroing in on downy mildew in rose stems

In this blog we will focus on the consequences of downy mildew on rose stems, from identification through to establishing control. This will serve as an excellent best practice guide for the control and management of the disease.

Easily recognisable purple patches of 2 cm or more can be observed on affected stems, often alongside longitudinal cracking of the stem. Under very humid and moist conditions, white mycelial growth may also be observed. Although Aegerter et al. (2002) has shown that symptomatic rose stems are extensively colonized within the stem cortex tissue, researchers have not been able to unanimously confirm whether downy mildew is a systemic disease in the rose plant. Many farm technicians have posited that downy mildew in stem can be dealt with by cutting off the sick part of the harvested stem, in order to meet production expectations. But this comes with long-term issues after harvest. 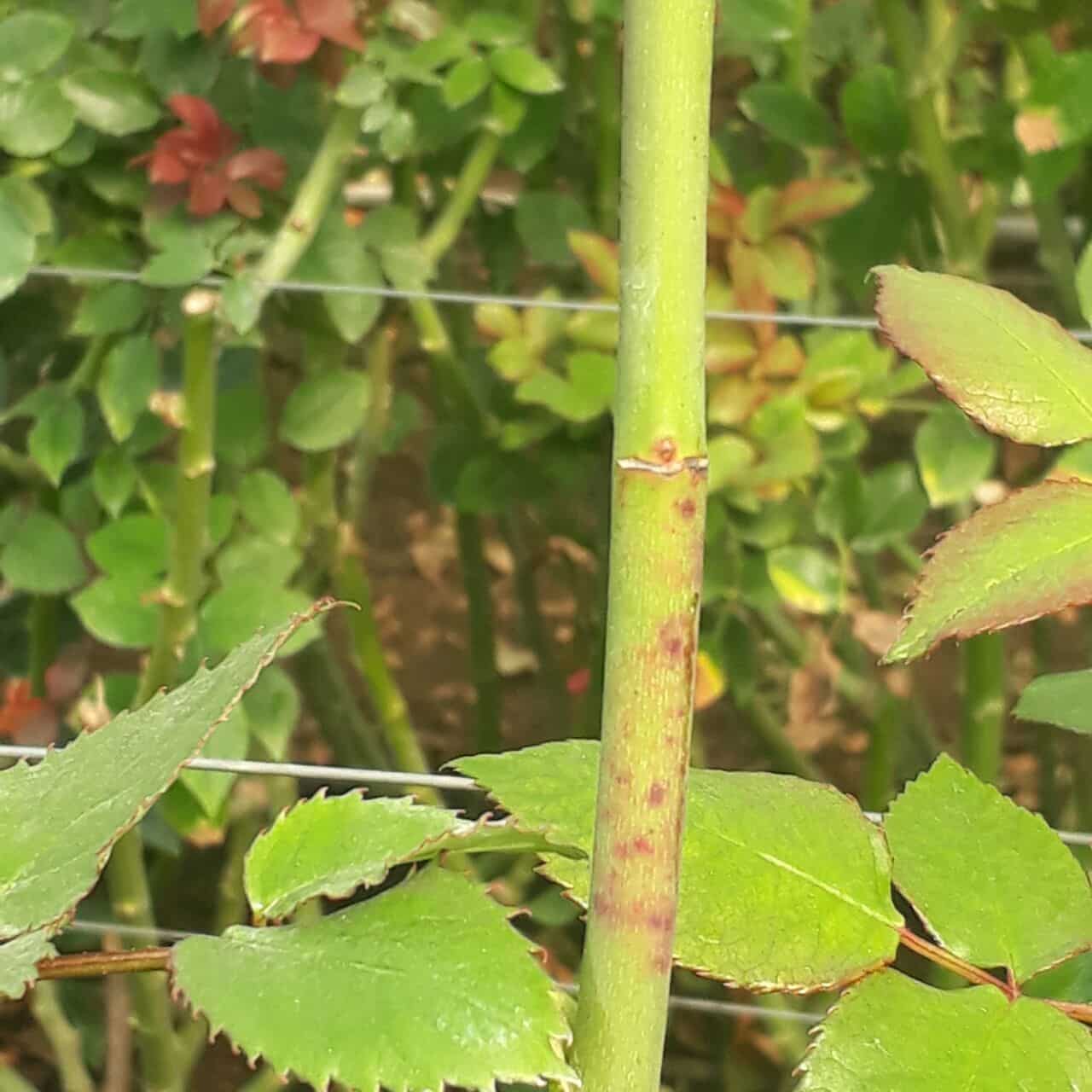 There is significant evidence to show that removing the impacted part of a rose stem only serves to postpone the repercussions of downy mildew. Ing. Roberto Toscano of Hoja Verde Cia. Ltda., Ecuador shared his experiences with downy mildew in stem affecting vase life significantly, even after chopping off the symptomatic part of the stem and rescuing the remaining, although shorter, stem for sale. After two days, the heads of the rescued stems started hanging and did not open up like the heads on the healthy stems harvested within the same bed. 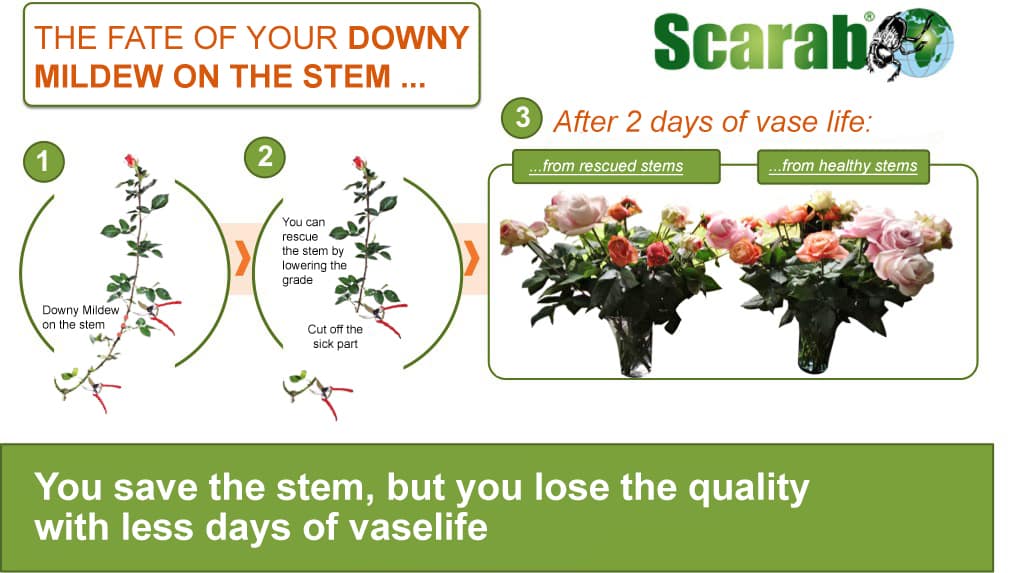 Rose varieties differ greatly in their susceptibility and tolerance to downy mildew, but many of the susceptible varieties are in high demand and fetch a good market price. Here are the five stages to reduce the likelihood or minimize the impact of downy mildew in rose greenhouses:

Winning the battle against downy mildew in rose stems

Growers must take an all-encompassing approach to combat downy mildew. Simply removing the affected part of a stem does not solve the issue and can actually do long-term damage to a grower’s reputation through very short vase life.